the siren
"a game changer for portland comedy" (portland mercury) 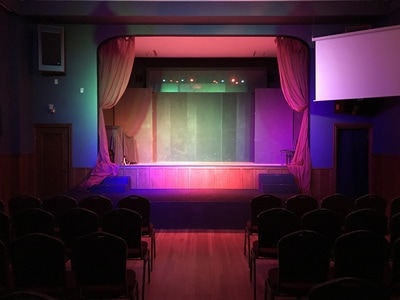 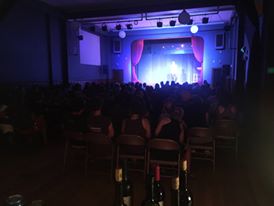 The Story of The Siren
The  Siren Theater has been years in the making.
It all began in 2010 when Shelley McLendon started Bad Reputation Productions. McLendon rented spaces all over Portland to put up shows under Bad Reputation but a few years after starting Bad Rep,  a few wonderful Portland performances spaces closed. One of the biggest obstacles for Bad Rep was finding an affordable and available mid-sized theater. Shelley had dreams of owning and operating her own theater space that would be the home of Bad Reputation, as well as be made available for other theater groups in town. She began looking for a space in 2013 and after several disappointments,  found the historic Chinese Consolidated Benevolent Association building in Portland's China Town. With the help of some amazing and angelic friends, The Siren Theater opened in October 2015.
(To hear Shelley and other Portland comedy makers talk about the scene, watch the City Club of Portland Friday Form recorded on June 3, 2016 HERE)


Details of The Siren
The official capacity of The Siren is 225 (standing). Seated in rows the capacity is 150.
The measurements of the stage:
Width is 18 feet
Depth is 11 feet (from edge of stage to back flat)
The measurements of the lower platform:
Height is 2 feet
Width is 18 feet
Depth is 5 feet
Technical details:
Lighting:  10 ADJ 12 par lights, Jands Stage CL light Board
Sound:    Allen & Heath Q16 Sound Board